Dreams About Japan: Broadcasting and Fishing 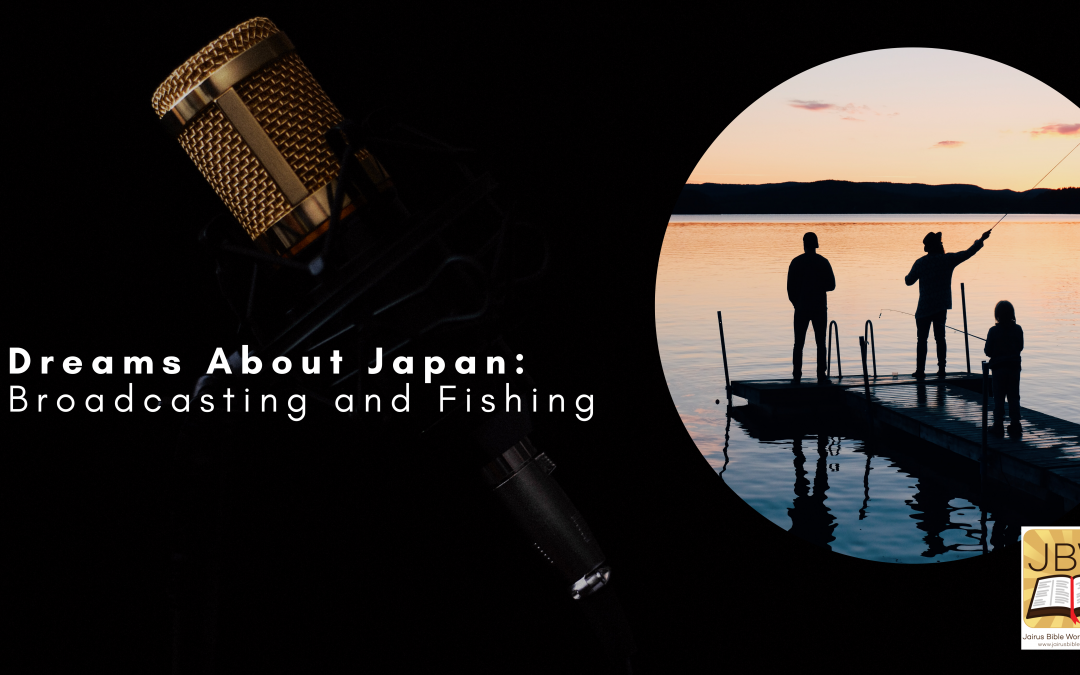 In this dream I went to Japan and I found myself in a place where I was listening to the radio and something was going on over the radio but I don’t remember what was being broadcasted. I felt it was something about God. I also had this vague impression it was in a foreign language. I guess this broadcast drew me to the next scene in Japan. In this part of my dream I found myself fishing but I didn’t have a fishing rod in my hand. Rather, I was picking up something from the sea by using a pair of tongs like the ones used in a kitchen. From what I could tell I could have been on a small island because I was surrounded by water.

In the next scene I met some people there. I thought they were Japanese. I asked them to teach me how to catch fish or sea creatures, and they were very willing to help me and they were also using tongs. Or at least I remember I was using tongs. Something was caught but I don’t think it was a fish but something else. Later I found my hand was hurt and I asked one of the guys to help me. He seemed strong and tall and was the leader of these people. I felt he was the Lord but I was not sure. Then I saw him opening a hole in his leg and pouring out something from that hole. I guess it could be sea salt or something that would heal my hand. I put the sea salt on my hand and rubbed my hand. He told me it would take a while to sterilize it or heal it.

I suddenly realized that I could not find my bag and I needed to find my bag because it contained something very important. Then one of guys in the group shot out a thread or a rope (One of my teachers in Christian Healing Certification Program offered by Global Awakening had a vision for me at the same time. She saw I was riding on a horse with a lasso in my hand to catch people for Christ with the love of God. I felt it helped to understand the rope and the propelling power of the rope behind it. ) then I found myself  being pushed by this rope to other places. I then met some Japanese people on the road and I saw some people were playing basketball. As I was running, I suddenly felt the burden to preach gospel to the Japanese people, I felt the love of God towards the Japanese was flowing in me which was not normal for me. (I am Chinese and I have never had a burden to preach the gospel to Japanese people before these dreams.) When I was under the basketball hoops, I caught the basketball and landed, and knelt down, and said sorry.

I woke up about 6:30am, fed the baby, and went back to sleep again. I began dreaming and I saw a screen which showed information related to preaching the gospel to Japan. I could not remember it in detail, but it was something like this. The movie on the screen said, one American went to Japan and had a good start. Then I saw people walking to different Japanese villages to preach the gospel to them. I saw a family with a young boy and they went to the entrance of a Japanese village and I saw some Japanese people in their traditional clothing come out the village to talk with them. They asked the Japanese people if they were open to receive something non-Japanese, like Chinese people and the gospel. Some seemed to refuse the offer. Then they went to next village and some were willing.  Later it looked like they set up a station and reached some goals in preaching the gospel. This part of the dream seemed to be a movie or story told on a big screen.